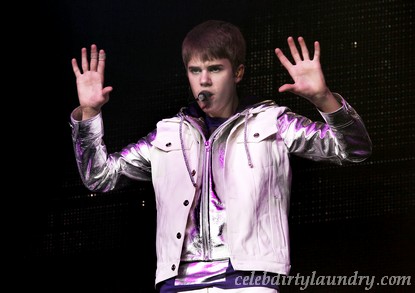 Last week, Justin Bieber caused some mad chaos at a hotel in Liverpool, England, after one of his concerts. He was holed up inside his hotel room for a long time, while police tried to make the crowd dissipate.

After Justin made an appearance on the balcony, he opted not to return to his hotel suite when he found out that two fans were disguised as cleaning people and had entered his room. The overzealous fans were discovered by Justin’s security team, leaving the teen singer to sleep in his tour bus.

A source said, “The hotel was swamped by fans all desperate to catch a glimpse of Justin. But two particularly enterprising girls snuck in through a side entrance, and stole two housekeeping outfits. After ditching their regular clothes and slipping into their costumes, they got the lift to Justin’s suite and knocked on the door calling, ‘Housekeeping.'”

The source went on to reveal, “Having been allowed in, the girls began half-heartedly polishing tables and dusting surfaces. No one realized until the girls were alone, and in his bedroom, taking pictures of his personal possessions on their phones. A member of Justin’s entourage in another part of the suite heard them giggling and came through, catching them in the act. The girls, following a telling-off, were evicted from the premises.”