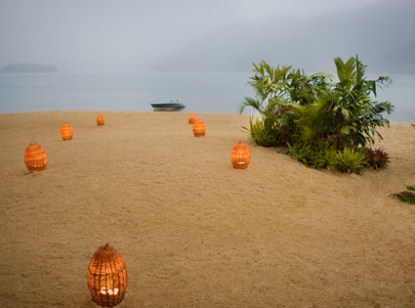 Our Valentine present from Robert Pattinson and Kristen Stewart YAY – a new photo from Breaking Dawn has been released.   The pictures is from the Isle of Esme  Bella Swan and Edward Cullen are married and this is where they spend their honeymoon a beautiful tropical island in South America.  Bella and Edward try to make love and they are successful there although Bella gets pretty bruised up.  The island is also where Bella gets pregnant with Renesmee.

This is another teaser by Summit who previously released a picture of Bella and Edward in bed and another picture of Kristen’s hand grabbing feathers.

Not much news is getting out about Breaking Dawn – but Summit is releasing just enough to keep us interested.  Meanwhile filming of Breaking Dawn is wrapping up in Baton Rouge and is moving to Vancouver where they are expected to film until April 2011.