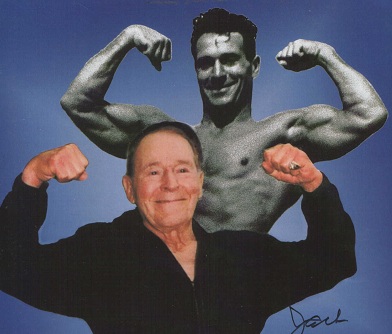 The Godfather of fitness Jack Lalanne passed away today at 96 years old. Jack was an American fitness, exercise, nutritional guru, and motivational speaker. He published numerous books on fitness and hosted a fitness television show  “The Jack LaLanne Show” between 1951 and 1985.  LaLanne celebrated his 95th birthday with the release of a new book titled “Live Young Forever” he discussed how he kept healthy and active well into his advanced age.  Until his death at the age of 96, LaLanne continued to work out every morning for two hours. He spent 1½ hours in the weight room and half an hour swimming or walking.

Lalanne died of respiratory failure due to pneumonia Sunday afternoon at his home in California.  RIP Jack Lalanne  (September 26, 1914 – January 23, 2011)