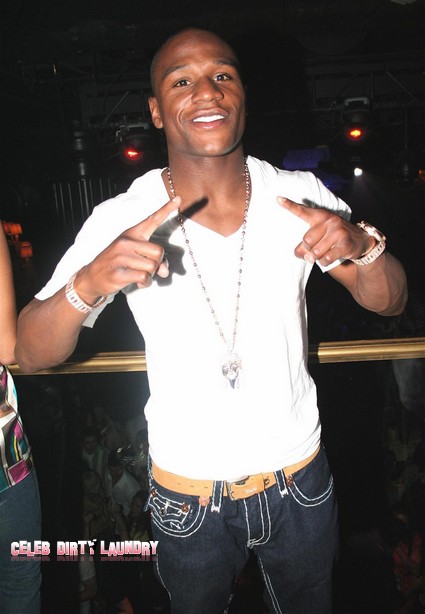 Its official, Floyd Mayweather Jr. is a dangerous man and not primarily for his skills in the boxing ring, but because he beat up a defenceless woman, namely the mother of his children, Josie Harris. Floyd has always been known as a violent jerk, a trait he demonstrated clearly in his last professional fight when he decked his opponent Victor Ortiz with a sucker punch. Anyway, the bum was sentenced Wednesday to 90 days in jail after pleading guilty to reduced battery domestic violence and harassment charges before a Las Vegas judge.

Floyd was sentenced to 6 months in jail, but 3 months of that sentence was suspended – he was also was ordered to complete 100 hours of community service and pay a $2,500 fine. He gets 3 days credit for time he has already served.

The plea deal avoids trial on felony allegations that he hit his ex-girlfriend and threatened two of their children during an argument at her home in September 2010.

Prosecutor Lisa Luzaich told Judge Melissa Saragosa that Floyd has been in trouble before and hasn’t been punished.

“He just continually gets himself into trouble and he is able to get himself out of it as well. Essentially it is because he is who he is and is able to get away with everything.”

“The only thing that’s going to get this man’s attention is incarceration,” the prosecutor said.

Floyd stood still in a striped olive vest and made no reaction when the judge imposed the sentence. He was told to report to jail on January 6th.

The judge said she was disgusted by the fact that Floyd’s brutal attack on Harris was carried out in front of two of their children, aged 9 and 10, who were traumatized by witnessing the attack.

Saragosa noted that police reported Floyd threatened to kill or make Harris “disappear,” and that their 10-year-old son ran from the house and jumped a back gate to fetch security. Floyd had taken cellphones belonging to Harris and the two boys, she said.

“Punishment is appropriate,” Saragosa said. “No matter who you are, you have consequences to your actions when they escalate to this level of violence.

Floyd Mayweather Jr. is an angry and entitled man who is a danger to society – his sentence was way too short. The judge and prosecution should not have made this deal. 3 months is a slap on the wrist and does not send an adequate message to other bullying brutes who might beat up their girlfriends or wives. We suggest a minimum sentence of 2 years in jail for any crime of violence. Let people know that here are real consequences for attacking and hurting others.

Tell us your opinion – is 3 months an adequate sentence under these conditions?

3 months is – too long; just right; not long enough