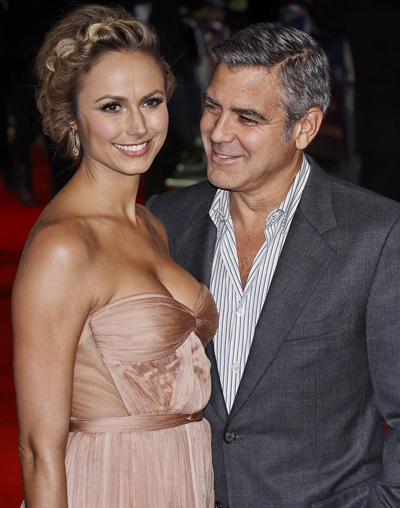 Being George Clooney‘s girlfriend is practically a full-time job, so it makes sense that Stacy Keibler is getting paid for it! According to InTouch Weekly, since Stacy started dating Clooney, the 32-year-old has gained thousands of Twitter followers (and, not to mention, has made countless appearances in tabloid magazines,) which is translating into some cold-hard cash.

It seems that the next best thing to having George Clooney at your event is having his current squeeze and the offers reportedly “keep rolling in.” Just this week, Stacy made an appearance at Spike TV’s Video Game Awards, where she presented an award and promoted “The Black Eyed Peas Experience,”a  video game that she is the spokesperson for.

Not only is Stacy profiting professionally from her relationship, but George has been showering her with cash and gifts as well! Reportedly, the Descendants star is planning on giving her a $15,000 Cartier Love bracelet with diamonds and a vintage Hermès handbag for Christmas, but that won’t be all that’s under the tree for her:

What on earth could Stacy possibly give him for Christmas? Her undying devotion? A promise to never bring up the “b” and “m” words around him (i.e. babies and marriage)?

Some unsolicited advice for Stacy: Enjoys the perks while you can, girl, because if your relationship with Clooney turns out in any way like Elisabetta Canalis‘ did, then it’s probably just a matter of time before you are cutting coupons, dancing on a reality show and making appearances at not-so-glamorous events, like the opening of a pizza parlor in Florida.