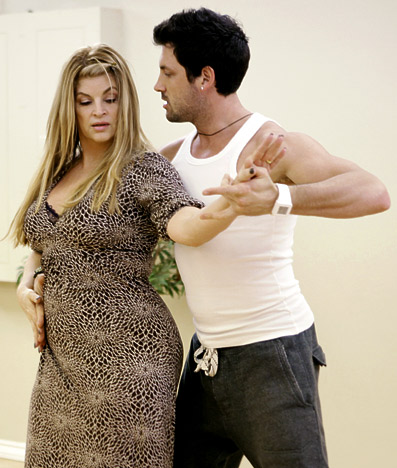 Late Night with George Lopez showed his low class and meaness when he made fun of Kirstie Alley on Dancing With The Stars.   Lopez Tonight on Tuesday was the scene of some very politically incorrect comments by the host when he compared the Dancing with the Stars contestant to a pig!

“She did a nice job,” George joked on Lopez Tonight after showing a clip of Kirstie dancing with her professional partner Maksim Chmerkovskiy.  George made the nasty comment “Her little hooves tapping away.”  He then did a play on the This Little Piggy Goes to Market nursery rhyme.  “And this is her going all the way home,” and Lopez played a clip of a pig squealing “wheeeee” while riding in a car.

Kirstie has had real trouble with her weight in recent years, and she wrote on her Twitter page about her dramatic weight loss before the show and has said she is expecting to lose a lot more during the competition.

“Had lost 60 lbs before DWTS… Haven’t weighed in three weeks but sure I’ve lost over 10 more…” she Tweeted Tuesday.  She has the second highest score on the season premiere of DWTS, receiving 23 points for her dance as well as high praise from the judges. Bruno Tonioli  told her, “Your foot placement was the best of the night.”  Carrie Ann Inaba said her dance “had sizzle,” and Len Goodman told her, “It was fun, it was cheeky and it made me feel good.”

What irks me is that ridiculing a person’s race, sex, religion, or a myriad of other handicaps or disabilities is totally taboo on TV – political correctness forbids even a hint or trace of nastiness directed towards anyone as a consequence of any of the categories above.  Yet being overweight is something that most people do not choose – they have different metabolisms and the human species exists over a broad range of ‘normal’ physiognomies.  Being chubby is not an indication of bad character any more than being black, white, asian, blind, or deaf is.  It is simply unfair, mean, and unethical to set Kirstie Alley up for ridicule because she is larger than some other Hollywood stars.  Furthermore, men who are chubby do not suffer the same nastiness as women.  I never heard any comment about the successful competitor Kyle Massey during last season’s DWTS although he was more overweight than Kirstie.  What’s up with that?  Woman are supposed top fit into some designer’s absurd idea of the proper body shape or else face ridicule – while men can go walking around plump as they like?