Get Your Garlic out Canada – The Twilight Vampires Have Arrived! 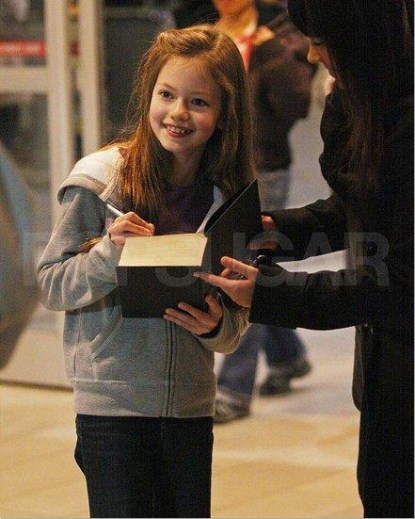 Unless you’ve been hiding under a rock for a really, (really) long time, it’s no surprise that the Breaking Dawn cast has finally touched down again on Canadian soil.  I for one, am glad to have them back!  Instead of seeing the many random pics of Robsten trapezing through the romantic city of Rio (I’ve been there folks, and have no fear Twi-hards, it’s desperately romantic), us lucky Canucks can enjoy seeing our faves on home turf.    According to the Vancouver Sun, the cast and crew have been trickling in one by one – including the newest (and youngest) addition Mackenzie Foy.   The 10 year old beat out thousands to play the role of Renesmee, Bella and Edward’s vampire-human child.   I guess I shouldn’t find it odd seeing a 10 year old signing autographs – and let’s be honest, this kid’s star meter is going to go off the scale with Breaking Dawn under her belt – but, well, she just seems so damn young!  Any actor lucky enough to get their teeth sunk into the Twilight Saga (no pun intended),  I guess have undoubtedly hit the jackpot.

With reports of KStew arriving with an injured wrist and rushing to an awaiting car with her head covered, both her and RPattz took separate cars after clearing customs and headed to the Sheraton Wall Center.  Expect more cast to arrive as the final installment in the series introduces fans to a whole new clan of vampires.

So as we anxiously await the next crop of images and news to come out as to when filming begins and the whole cast is re-united, the cast and crew remain tight-lipped.  It’s rumoured that the location of Bella’s house is that of the previous one used in New Moon and Eclipse, all other production details  remain a mystery!  Stay tuned for more news on the final installment of the Twilight chapter..the question begs to be asked – whatever are we going to do when it’s all over???