Giuliana Rancic: My Breasts Have Never Defined Me (Photo) 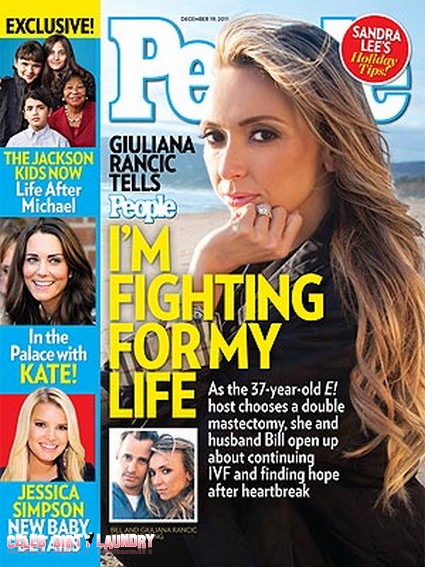 The current issue of People Magazine features the cover story ‘Giuliana Rancic: My Breasts Have Never Defined Me.’  Giuliana Rancic and her husband Bill Rancic announced this week that she had decided to undergo a double mastectomy.  The couple has gone through so much over the last year and half.  The two have struggled for quite some time with IVF treatments in trying to get pregnant, to then finding out Giuliana was diagnosed with breast cancer – one can only imagine the obstacles they have been faced with.  She told People that she intends to embrace her scars from the double mastectomy and reconstructive surgery.

“I think scars tell such an incredible story,” the E! News anchor, 37, tells PEOPLE in this week’s cover story. “I’ll always look at them and think, ‘Wow, I made it through that.’ ” “Usually it’s 2 in the morning, and I’ll turn around from Bill so I don’t wake him up, and I just cry,” she says. “I sob and think, ‘How did this happen?’ “My breasts have never defined me – and now they never will,” says Giuliana, whose surgery is scheduled for Dec. 13.

Double mastectomies are lauded by some researchers for having a 99% success rate in the fight against breast cancer.  We hope that she gets through this tough time with flying colors and is able to rebound with a baby! Stay strong, Giuliana!

For more with Giuliana and Bill, including their plans for parenthood, pick up this week’s issue of PEOPLE