BY Sarah Silverthorne on April 23, 2011 | Comments: one comment
Related : Glee 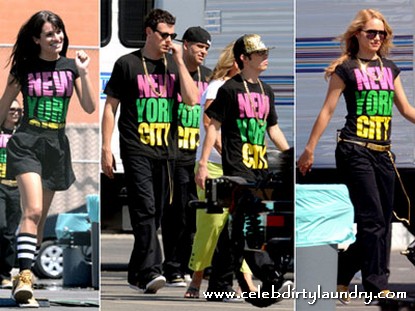 Ok, so apparently I didn’t know that Fox’s hit show Glee was heading to the Big Apple, otherwise known as NYC.  Well, I suppose it only seems fitting that the amazing concoction of talent that the show exudes be Broadway bound. There were rumors circulating as to whether the cast would be filming the Nationals (if you don’t know what that is I suggest you get on the Glee train) at the Lincoln Center but this has yet to be confirmed.

Filming was meant to commence this upcoming week, so naturally Glee’s Lea Michelle was spotted on Saturday morning with boyfriend Theo Stockman making their way through LAX Airport (where the show is filmed) heading NYC bound. Earlier that day co-star Dianna Agron left L.A on a flight – one can only presume where the lovely lady is headed?

Numerous signs have been posted around the core of the city for an ‘untitled 20th Century Fox TV Project’ for Monday, April 25. Based on the location of the signs – and I’m no New Yorker – all ‘signs’ are leading to Rockefeller Center or Times Square. Sounds good to me! Stay tuned; we’re on to those sneaky devils!!!