Glee creator Ryan Murphy Confirms That The Cast Will Graduate! 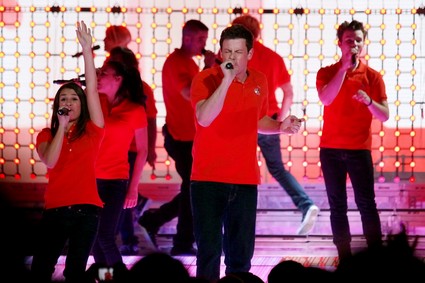 So the cast of Glee isn’t all going to fail and get held back another year in high school therefore ultimately unable to graduate?  I’m shocked!  Well, not really, but I have often wondered – especially when it comes to television series’ where the stars must, you know ‘get older’ – how FOX would figure they’re way out of this one.  Do you remember old school Beverly Hills 90210?  Them going to UCLA just didn’t cut it..

So this brings us back to square one, where even in TV land, there is no stopping time.  Glee creator Ryan Murphy has admitted that he is going to bring in a whole new crop to the high school.  Cool – yes, but what about our old favs?  Too washed up?

He confirmed to Ryan Seacrest that he’s looking to move the current cast (where?) from high school and bring in a new bunch:

“That is true. I don’t think of it in terms of eliminating or replacing. Because I think the thing about this cast is people love them and they are incredibly talented. They’ve left sort of an indelible mark,”

“The thing that I wanted to do and the cast wanted to do, we didn’t want to have a show where they were in high school for 8 years. We really wanted it to be true to that experience. We thought it would be really cool if we were true to the timeline.”

No more Rachel Berry?!  Apparently Matthew Morrison and Jane Lynch will stay on the series, but will fans openly accept a whole new gang of misfits?  I’m on the fence on this one.