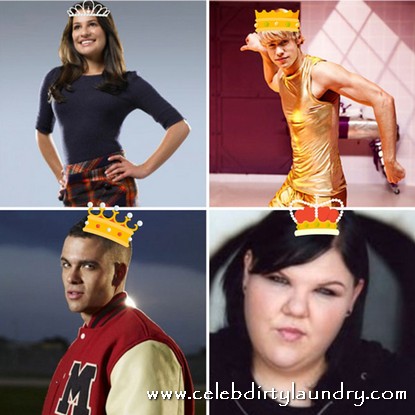 Last night an extra for Glee took to twitter to leak some MAJOR spoilers for the prom episode!  The extras name is Nicole Crowther.   Glee boss Brad Falchuck publicaly took her to task for having such a big mouth.

Crowther, who is now known as a good Glee spoiler, tweeted, “K is PQ and Ka is PK.”  This means that Kurt won prom queen and Karofsky is prom king.  Crowther also took the liberty to answer other fan questions.  Falchuck responded by saying to Crowther, “hope you’re qualified to do something besides work in entertainment…Who are you to spoil something talented people have spent months to create?”

Ryan Murphy, who is the executive producer for Glee, stated earlier in the year,” I love the idea of Kurt being prom king.”   Questions have been stirring over what Fox will do to cover this up.   So far they haven’t responded on whether or not they will reshoot the prom scenes.