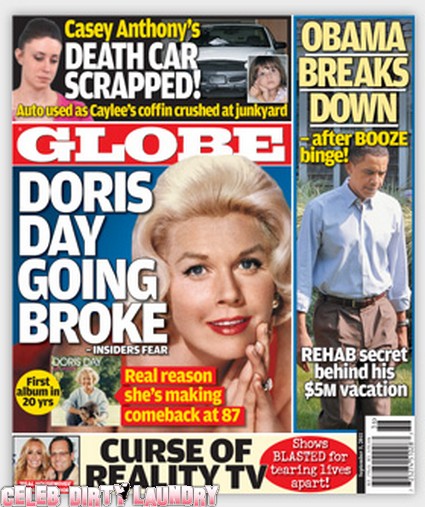 In the September 5th, 2011 issue of Globe Magazine their cover story is “Doris Day‘s Comeback Secret ‘  Blazoned accros the cover is ‘Insiders fear – Doris Day Going Broke’ and they have the info on the real reason she’s making a comeback a 87.  The also claims she is making her first album in 20 years.  Doris had an entertainment career that spanned through almost 50 years, Day started her career as a big band singer in 1939, but only began to be noticed after her first hit recording, “Sentimental Journey”, in 1945.

Globe claims: At 87, showbiz legend Doris Day is releasing a new album – but it’s not just for her fans. Insiders claim she’s going broke! You’ll learn all the details of how one of Hollywood’s most beloved stars may be facing the same dire money woes as millions of other aging Americans — all in this week’s GLOBE.

Doris was famous for her ‘girl next door image’ and she recorded more than 650 songs during her career.   Doris  was also an actress and become the top-ranking female box-office star of all time and ranked sixth among the top ten box office performers  as of 2009.  I hope this story is just pure speculation on the part of Globe!