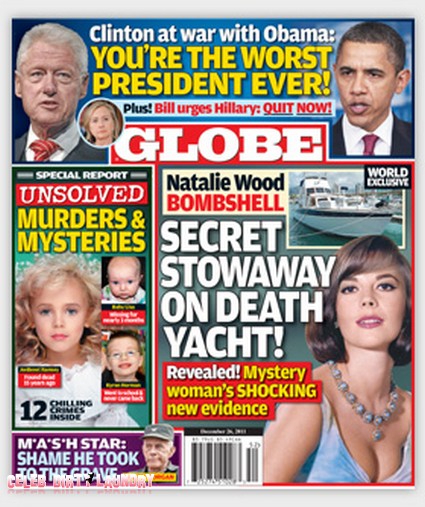 In the current issue of Globe magazine they feature the cover story ‘Natalie Wood Bombshell, Secret Stowaway on Death Yacht.’   The police recently reopened the Natalie Wood case as a homicide investigation and the magazine claims they have explosive new evidence in Natalie’s death.  Furthermore the magazine has all the details of a secret stowaway who has shocking new evidence on the case.   One of those insiders again I guess, I really need to get one!

Globe has more: In a blockbuster world exclusive, GLOBE has learned that there was a FIFTH person – a secret stowaway woman — onboard the yacht the night actress Natalie Wood drowned and her testimony could be key to proving once and for all what REALLY happened in Natalie’s final moments. You’ll learn the stowaway’s explosive revelations ONLY in this week’s GLOBE.

Meanwhile for the first time since cops reopened the Natalie Wood case as a homicide investigation — the dead actress’ former husband Robert Wagner showed his face in public.  Wagner’s not officially a suspect in the investigation — but there’s been widespread speculation that investigators are looking into the possibility that he was responsible for Wood’s death back in 1981.

Also included in this week’s issue they have a special report on 12 Unsolved Murders & Mysteries For 2011 including including the slaying of tot beauty queen JonBenet Ramsey, the abduction of nursing student Holly Bobo and the disappearance of an entire family of four.

To find out all this and more pick up the current issue of Globe magazine!