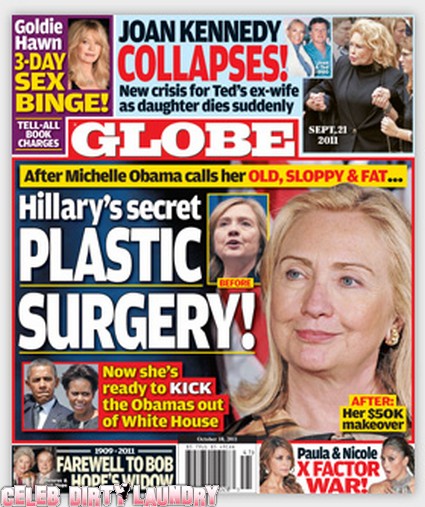 The October 10th, 2011 issue of Globe magazine features the cover story ‘Hillary Cinton‘s Plastic Surgery’  the magazine claims Michelle Obama called Hillary old, sloppy & fat consequently Hillary had a $50,000 makeover to make herself feel better.  Hillary is not taking those comments sitting down and now that she has had her makeover she is ready to kick  some butt and is throwing the Obamas out of the White House.  LOL Not sure how she is going to do that exactly she will need more than a makeover to accomplish that.   Perhaps she can tell her secret to the Republicans :-)

Globe Magazine has more: Sparked by cruel insults about her appearance from First Lady Michelle Obama, Hillary Clinton has secretly undergone a dramatic $50,000 makeover. Read the outrageous things Michelle’s said and what experts say Hillary’s had done – and why — in the new GLOBE.

Funny thing is the before and after picture look exactly the same.  Globe’s cover claims are becoming more and more ridiculous week after week.  If Hillary got all that plastic surgery she better go back and talk to her doctors because it has not made a huge difference.   I am certain this story was made up by the magazine to sell more copies.

Also featured in this week’s magazine “Goldie Hawn’s 3 Day Sex Binge’.  Goldie Hawn‘s ex-husband is writing a tell all book about her and Globe claims they have all the info on a 3 day sex marathon she has with a man she met at a concert.

If you must find out this and a lot more unsubstantiated speculation, pick up the current issue of Globe Magazine.