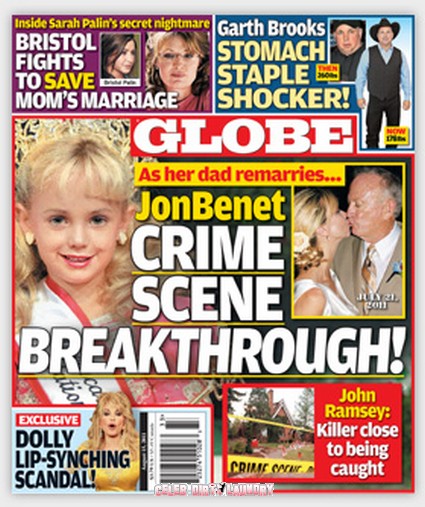 In the August 15th, 2011 issue of Globe Magazine, their cover story is about JonBenet.  Since her father Jon Ramsey remarried last week what better time to recycle a JonBenet story. Blazoned across the cover “as her father remarries, John Bennet Crime Scene Breakthrough!’  The magazine claims that the killer is close to being caught.

Globe claims: The fiend who killed JonBenet Ramsey on Christmas has finally been revealed by a new police task force – 14 years after the little beauty queen’s tragic murder, sources say. GLOBE’s Special Report bares the chilling reason the tyke was slain and the shocking truth about her parents, John and Patsy. It’s must reading!

Country singer Garth Brooks is looking terrific, but his shocking sudden weight loss has fans speculating whether he’s had his stomach stapled.   The magazine claims they have discovered the mystery behind how he shed 80-plus-pounds and they are going to tell us the secret.

To find out all and more pick up the current issue of Globe!