Globe Magazine: Casey Anthony: Proof She Got Away With Murder 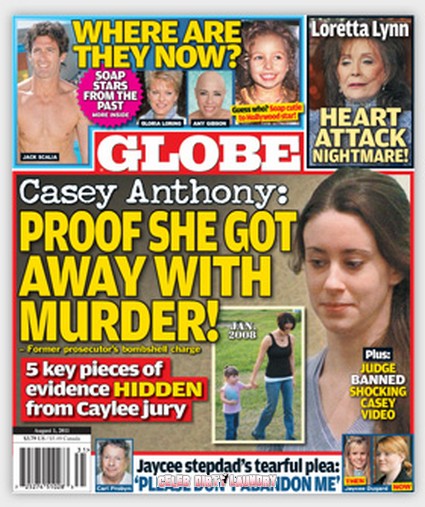 In the August 1st, 2011 issue of Globe Magazine, their cover story is about Casey Anthony and blazoned across the cover is  “Casey Anthony: Proof She Got Away With Murder.”  The magazine claims a former prosecutor has bombshell charges  and reveals 5 key pieces of evidence hidden from Caylee jury.  They also claim the judge banned shocking Casey video.

Globe claims: “America’s most hated woman — Casey Anthony — got away with the murder thanks to key pieces of evidence that were shockingly kept from the jury, including a damning video of her bizarre jailhouse meltdown when daughter Caylee’s remains were found, charges a former top prosecutor. Find out what they were and who bungled the case – only in this week’s GLOBE. “

Meanwhile the whereabouts of Casey Anthony are not know.  Some are speculating that she has already returned home.  A woman hidden under a sweater was whisked out of a small plane and into a building at an Orlando, Fla., airport on Tuesday.  Jose Baez, her current lawyer, insists it is not her.