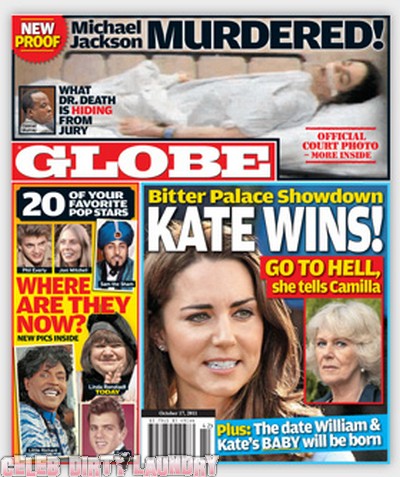 According to the latest issue of Globe Magazine, there has been a bitter Palace showdown between newly crowned Duchess of Cambridge, Kate Middleton and her mother-in-law, Camilla!

The royal rumble was reportedly so bad that Kate confronted Camilla after she badmouthed her one too many times. Kate and Camilla was said to have had an angry shouting match — and guess who came out on top? Kate, of course!

Also featured in this issue is the manslaughter trial of “Dr. Death”, Conrad Murray. They are saying that Michael Jackson was murdered and they show the death photo that shocked the jurors in the trial. They’re also exposing what Dr. Murray is allegedly hiding from the jury!

Apparently they’ve got proof that Michael was murdered and Dr. Murray’s secret — he’s just the fall guy? Who is really behind the death of the King of Pop?

Also included is a “Where Are They Now?” feature, talking about icons such as Little Richard and Sam The Sham and what they’ve been up to lately.

It sounds like a lot of drama! Does it make you want to pick up a copy of Globe to find out what the jury doesn’t know?