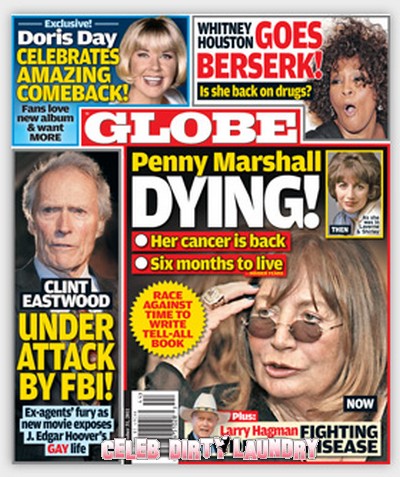 The October 17th, 2011 issue of Globe magazine features the cover story “Penny Marshall is Dying.”  Penny Marshall is said to have been battling with lung and brain cancer since 2009 and the magazine is claiming that the cancer is back and Penny has been given six months to live.  Penny’s agent released a statement last week stating that she was writing her autobiography, called “My Mother Was Nuts.”  Globe has put it all together and tastelessly speculates that she is racing against time to get the book finished.  Her book will be published in 2012.

Globe has more: Courageous Penny Marshall thought she’d beaten cancer, but it’s back and insiders fear the famed Laverne & Shirley star’s got just six months to live! Read the gripping account of Penny’s determination and the special good-bye she’s preparing for her loved ones – all in this issue of GLOBE.

Also featured in this week’s issue Whitney Houston goes berserk.    Whitney who has battled alcohol and drugs problems for some time refusal to fasten her seatbelt on a flight last Wednesday.  Of course this leads Globe to conclude that Whitney is back on drugs and claim they have all the info on her wild breakdown.

The Globe cover this week is morbid, shame on you Globe!  They will do anything to sell magazines!  If you need to find out all the details of these stories and more pick up the current issue of Globe!