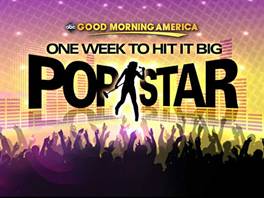 Is it possible in today’s viral universe to find an everyday teenage girl and launch her to superstardom in just one week?   All week ‘Good Morning America’ fans have watched as fourteen-year-old Lexi St.George took the first steps to becoming a viral sensation.  Today, on the New York set, she watched as her music video was released to the world.

Lexi from Palmdale, CA was chosen among the dozens of girls who came out to the Los Angeles area flash auditions held by “GMA” and Ark Music Factory.   Patrice Wilson, the record label’s founder and the man who made the viral mega-hit “Friday” into an overnight success, saw a “star factor” in Lexi.  This made him choose Lexi embark on “Good Morning America’s” “Pop Star” challenge.