Has Justin Theroux Moved In With Jennifer Aniston? 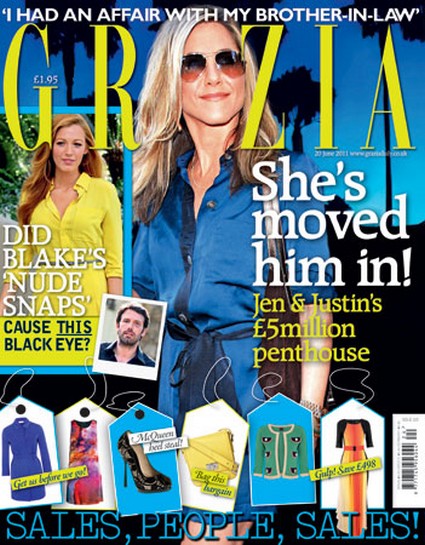 Has Jennifer Aniston, 42,  moved her boyfriend Justin Theroux, 39,  into her house.  Well yes, according to this week’s Grazi.  With the byline across the cover: “She’s moved him in, Jen & Justin’s 5 million penthouse.” The new couple seem to be going strong.  Justin split up with his previous girlfriend of 14 years Heidi Bivens and many feel Jennifer was the homewrecker.

Jennifer even threw a party to introduce Justin to her closest friends Courteney Cox and Chelsea Handler and apparently they all gave their seal of approval.   It is believe this relationship may work for Jennifer because generally she goes for the handsome leading man looks but Justin is different.  Justin is a versatile actor and somewhat scruffy, more down to earth.

So are they moving in together?  Is the magazine correct?  Who knows… but the two were recently seen wearing matching rings a clear sign that their relationship is heading in that direction.