Heidi Montag Says NO To Dancing With The Stars 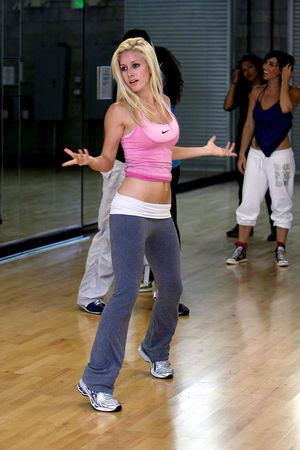 The Hills star Queen of Plastic Surgery Heidi Montag, 24, was reportedly offered a spot on  Dancing With The Stars.  Apparently a contractual agreements she made when she got her gig on The Hills did not allow her to do the show.  Furthermore, Heidi’s agent tried to get her the job as host of the show before Brooke Burke was hired.

Radaronline further reports:   Montag was first pitched by her agent to try to be the new host of the hit ABC dance show before Brooke Burke took the job in 2008, reveals the insider. She was then approached to be a contestant, but prior commitments with MTV led her away from the dance floor and in to the jungle for NBC’s reality TV show, I’m A Celebrity…Get Me Out Of Here!  “She was devastated, she had even started training on the side”

It might have been interesting seeing her one the show.  We  would have gotten to see if she was as clueless as she seems.  However, with those big boobs she would have had a hard time dancing without falling over LOL