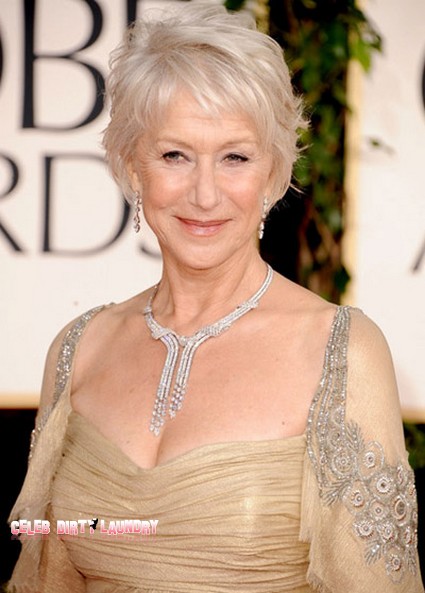 Oscar Winner, Helen Mirren has reportedly signed on to guest star on the January 17 episode of Glee.  A TVLine exclusive report earlier today revealed that in an interesting twist, Dame Mirren will “be heard, not seen” throughout the episode which also guest stars NeNe Leaks from Real Housewives of Atlanta. Her distinctive voice will provide the inner dialogue – ‘the voice in your head’ – for one of the regular cast members – but just which cast member thinks in Helen Mirren’s voice has not been revealed at this time.

According to an insider the Oscar, BAFTA, Golden Globe, Emmy and Sag Award Winner has already been hard at work on the episode. “Helen came in and secretly recorded several long and hilarious monologues two weeks ago. Then she visited the kids on the set, and they had no idea she was coming; they were stunned.”

Apparently the voice over role was written with The Queen actress in mind before securing her for the part. Luckily for the folks at Glee, Mirren is a fan of the series “and the message it sends about arts education” according to TVLine.

Access Hollywood reports that NeNe Leaks is said to be joining the cast as Coach Roz facing off against resident bad gal, Sue Sylvester. And in other guest star news for 2012, Gloria Estefan has signed on to play Santana’s Mother.

Naya Rivera (who plays Santana on the series) told Access Hollywood, “I have met [Gloria]. She came to sent earlier on in the year and brought her kids and I got to meet her then and I thought that was cool enough and for her to be playing my mom, it’s like, Yes!”