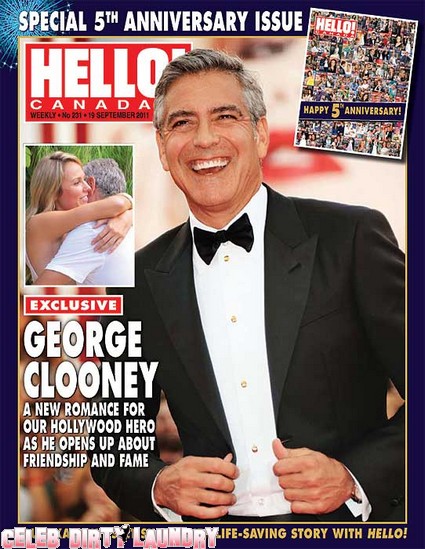 The current issue of Hello! Canada has an exclusive look at George Clooney, 50,  and his new girlfriend.   According toHello! magazine even though George is trying to keep it on the QT he is dating former WWE professional wrestler  Stacey Keibler, 31.  The magazine has pictures of them laughing and smiling together.

George who split from his last girlfriend Elisabetta Canalis, 32, in June after two years has known Stacey for five years.

According to the magazine: “Soon after the break up, romance is believed to have blossomed between the handsome actor and Stacy – who is now a model and actress.  But the pair had apparently arranged a romantic rendevous in LA this week before George goes to the Toronto Film Festival.”

Stacey recently jetted to the George’s Italian retreat on the shores of Lake Como to spend some quality time with him.   She even tweeted about relaxing at Clooney’s villa, posting, “I’m in heaven.”

So bad news ladies George is off the market!  If you want to read more pick up the current issue of Hello! Canada Magazine which is on stands now!