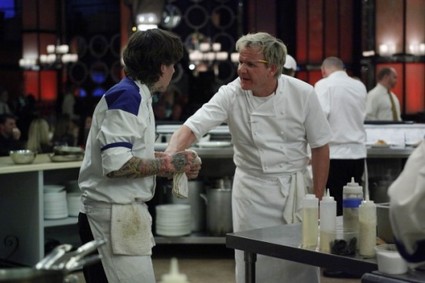 Tonight’s episode of Hell’s Kitchen Episode 8 “10 Chef’s Compete” has a surprise special guest star, Austrian Celebrity Chef  Wolfgang Puck.  If you missed last nights show catch our recap HERE.   Tonight’s episode has, more whining, fighting and some of the worst dishes ever prepared!  It is hard to believe any of these people are chefs.

Chef Gordon Ramsay tells the teams that they have to go back to the dorm and choose a team leader each.   The red team nominates Will and the blue team Jennifer.   Ramsay then asks each leader who is the weakest leader on their teams and Will says Tommy while Jennifer says Carrie.

The challenge for tonight is for each team to create five American classics.  But in usual Chef Ramsey fashion there is a twist.  The twist  is that Ramsay is going to give both Carrie and Tommy the chance to redeem themselves.  They will be choosing the dishes for the challege. One more surprise, Ramsay announces to the teams that there is a guest judge, Wolfgang Puck!

First up is Jamie and Tommy, Jamie gets a point for the red team.  Next is Elizabeth and Natalie, Natalie gets a point for the blue team. Elise goes up against Will, Puck says Elise’s meal looks like a mess and is not impressed with either team.   Jennifer and Paul serve soup and Jennifer gets a point for the red team.   Last dish is the pizza, Carrie presents an undercooked pizza and Jonathan presents a watery pizza and tells Ramsay that he didn’t have a say in the dish and is pissed that he had to present an embarassing dish.  Ramsey won’t even let Puck try the watery pizza.  Ramsay announces that red team wins and gets  to cruise down Sunset strip in a convertible and enjoy a special performance at the Laugh Factory.

The blue team get to clean and prep both kitchens, as well as the dorms.   The moment it gets down to the hard work, Jonathan claims a pulled muscle in his neck and it pisses off the other chefs.   Meanwhile, the red team return after a relaxing and fun day away from the kitchen.   Jonathan finally returns to the kitchen after all the prep is done.

As the doors open for Hells Kitchen, Ramsay’s special guest arrive, the US Coast Guard.   Carrie gets off to a bad start with the pizza dough making, then when she goes on to the Risotto, Jamie has to help her get the appetizer out.   Meanwhile, Jonathan is screwing up the capellini and Ramsay pulls him aside and tells him that he had a chef two years ago that broke his arm and went on to win the competition, so there’s no excuse to screw up in the kitchen with a pulled muscle.

To read the rest of the recap visit our sister site HERE!