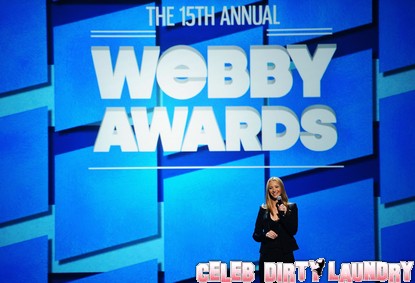 Last night was The 15th Annual Webby Awards, hosted by Lisa Kudrow in NYC at Hammerstein Ballroom, and it was a huge night for the Internet!

Highlighting a star-studded evening of Webby friendly five-word speeches, Dan Savage struck back at Tracy Morgan’s recent controversial remarks in his acceptance speech of a Special Recognition Award at the 15th Annual Webbys tonight at The Hammerstein Ballroom. Savage, accepting his award for founding the groundbreaking It Gets Better Project, used his short speech to deliver a pointed message to the outspoken comic.

“Tracy Morgan can suck my…,” said Savage in his scathing critique of the star of NBC’s 30 Rock.

In accepting its award for Person of the Year, IBM supercomputer Watson pointedly addressed the controversy of a computer walking away with an award clearly aimed at humans. “Person of the year. Ironic.”

And, ignoring the famous Webby Award five-word speech protocol, funny man Will Ferrell accepted Funny or Die’s award via video alongside site co-founders Adam McKay and Chris Henchy with a haiku. “Thanks for this award. I will put it in my house next to my instructional poetry textbooks. Thank you.”