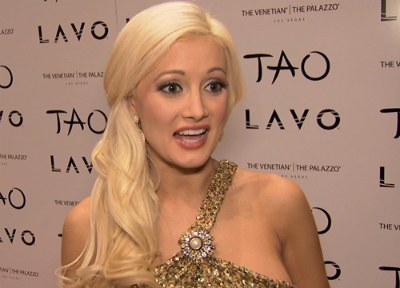 After crapping all over Hugh Hefner’s engagement to fiancee Crystal Harris, Holly Madison says she wants to pose for Playboy again. Perhaps she feels her star is fading???

The former couple ended their relationship in 2008 and afterward, he started dating Crystal along with the Shannon twins. She wanted to get married and have a baby, but Hef wasn’t feeling it. Now that he has whittled it down to one girl and has plans on marrying her, Holly voiced her opinion on the matter — and it wasn’t a good one.

She said that she felt Crystal might be too young to get married and you never know what these girls’ intentions are. Now that all of that has happened, Holly says she would totally pose nude for the bunny magazine again. Perhaps she’s trying to gain Hef’s interest again???

She said, “I wouldn’t mind doing Playboy again. But only if I had creative control.”