Hugh Grant Tries To Buy Off His Baby Mama 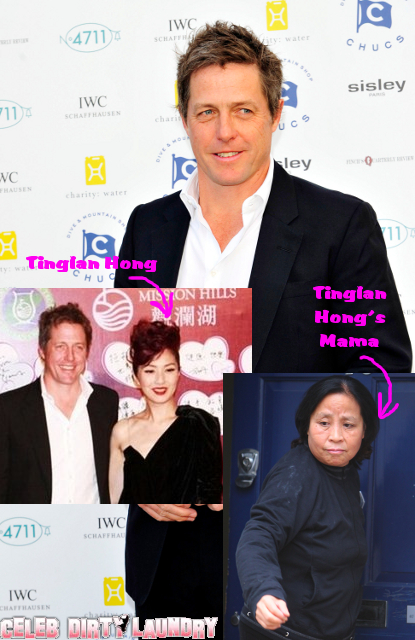 Hugh Grant has aways been a womanizing low-life and it’s good to see that being a dad hasn’t changed the star. Hugh has tried to placate his baby mama, the Chinese actress Tinglan Hong, by planting her in a luxurious $2 million London home owned by his cousin.

Hugh was good enough to visit Tinglan yesterday while he had a break from filming in Germany.

The 51-year-old actor pulled up to the house in Ferrari, and stayed for all of 40 minutes – no doubt he had another woman to whom he to needed to hurry off to.

He said: “I’m only here for 24 hours, I’m filming in Germany. I’ve come back to protect my baby.”

Protect his baby from what?  Too much of dad?

Tinglan, 32, is said to have moved to the property – bought by Flora Hood, the daughter of Hugh’s aunt – to be nearer the star’s house in nearby Fulham while she was pregnant.

The pair met in January and went on a string of dates (read ‘they had lots of sex’) but by April they had split up and have only met on a few occasions since.

Hugh did not attend the birth of his daughter – big surprise – on September 26, as he was at a political conference in Liverpool.

The renowned ladies man was spotted on a date with German-born jazz singer Elisa Schmidt – who is 30 years his junior – in Berlin the day before his child’s existence was revealed.

However, Elisa – who is believed to know about Hugh’s baby – claims they are nothing more than friends.

She said: “I was in London with Guy Chambers to talk about my first album.  In the evening we shared a meal and I got to know Hugh Grant. But there is nothing more than friendship.  He is in Berlin and invited me to dinner.  That is all.”

However, according to Bild, a German newspaper, the pair was spotted “flirting and sharing hot kisses” in the back of a taxicab during their most recent date.

Hugh had a 13-year relationship with Elizabeth Hurley which finally ended in 2000. The relationship was somewhat damaged by the blow it received when police interrupted the $40 blow job Hugh was ‘enjoying’ from a prostitute named Divine Brown in 1995… in his car.