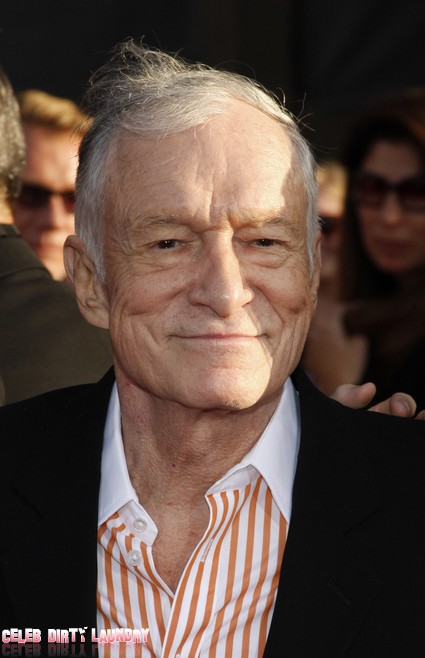 Hugh Hefner is both pleased and relieved that gold digger Crystal Harris called off their wedding. In hindsight Hef is aware that Crystal used him and basically played him for a fool. The 85-year-old founder of Playboy was initially shocked and appalled when Crystal called off their wedding just days before they were due to be married last June.

Now that he has had time to reflect on the relationship Hef is grateful she called it all off as he thinks he “misjudged” their romance. Of course it is unclear exactly what the old lecher has learned since he is now dating Crystal’s close pal Anna Sophia Berglund as well as Playmate Shera Bechard.

Hef said: “I certainly cared for her (Crystal), but it could not have played out any better because I obviously misjudged the relationship.  I’m a romantic and romantics tend to do that. Thanks to Anna, I fell into a very nice back-up relationship and then with Shera.”

Hefner is a romantic like Ashton Kutcher is faithful.  Hef spoke in an interview with Britain’s OK! Magazine: “The simple truth is, for a guy who is known for being America’s number one playboy, I’ve been trying to settle down for a few years but picking the wrong ladies.”

To me it seems that what Hefner does is buy ‘love’ and sex from women who’s only reason for being with him is his wealth and fame. What do you think? Do any of these playmates, 1/3 of Hefner’s age, really love him? Is it okay to try to buy love? Let us know in the comments below.