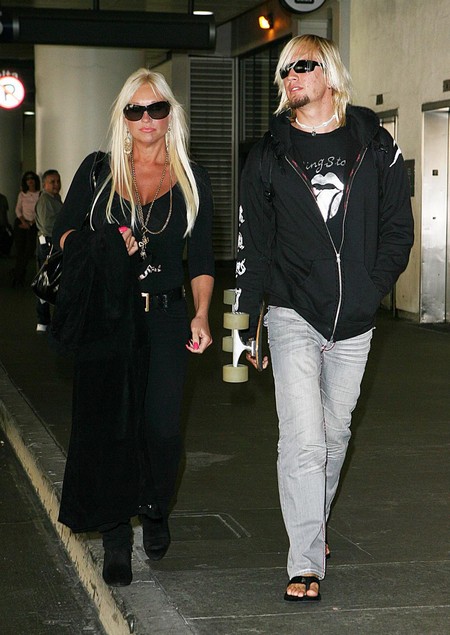 Hulk Hogan‘s ex-wife Linda Bollea is the 52 year-old sugar mama to her 23-year-old toyboy fiance named Charlie Hill. That itself is already newsworthy, but even better is that Linda has decided to display her depraved lifestyle on television by taking part in ‘Relationship Rehab.’ The Hulkster must be so proud… .

But it is funny – when Linda wants to spend a nice romantic evening with her boytoy he probably wants to cruise some chicks or play video games. Charlie was studying for his driver’s license when his sugar mama was already 45!

Linda’s divorce from the wrestling legend was finalized in 2009 – and she and her toyboy have agreed to appear on the VH1 show in a bid to save their romance.

According to TMZ.com, Linda and Charlie – who got engaged in 2009 – have already begun shooting and are hoping it will iron out any problems in their relationship.

Last month, it was revealed Hulk had paid Linda $7.44 million in the couple’s 2009 divorce.

The former WWE star – real name Terry Bollea – agreed to give Linda over 70 per cent of the $10.41 million that was held in bank and investment accounts, including a $3 million property settlement and he signed over 40 per cent ownership in his various companies as part of their financial agreement.

Linda also received a Mercedes-Benz, a Cadillac Escalade, a Corvette, a Rolls-Royce and various off-road vehicles but TNA star Hulk keeps the rest of his considerable car collection.

I’m sure that Linda has more than enough money to buy/rent another young stud just in case her relationship with Charlie does not get properly rehabilitated.