BY Nicholas Sanford on December 13, 2011 | Comments: one comment
Related : The Hunger Games 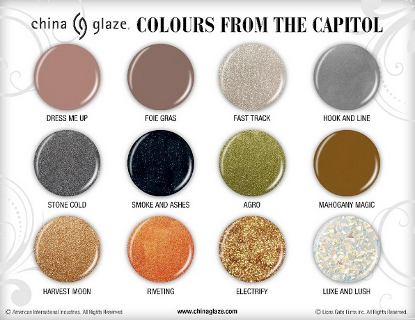 The Hunger Games are quickly approaching and the Districts of Panem are readying their bows, deadly instincts, and . . . nail polish?!?! That’s right, folks. A Hunger Games-inspired line of nail polish, which will be manufactured/produced by the company known as China Glaze, will become available a few weeks before the film’s release.

All the colors in the palette (pictured above), titled “Colours from the Capital,” were inspired by different elements from the film/book series to create colors that reflect the vibrancy of Suzanne Collins’s fantastic dystopic world.

The project was thought to be dead after a whole bunch of lawsuits (over creative rights, etc.) ensued, but all legalities were apparently resolved and now all you ladies can wear some fancy Hunger Games nail polish while you wait in line for the premiere. We won’t bore you with all the legal issues surrounding the story, just look at all the pretty colors! We will say, though, that a major difference we can see between the original palette and the one pictured above is that the names of the colors, which originally blatantly alluded to characters/events from the series, have now been given generic names.

As reported by Fashionista, “the new collection will feature 12 colors all inspired by the film, including a matte grey (inspired by the coal Katniss’ district 12, obvi) and a shimmery gold (inspired by Cinna’s gold eyeliner). And with clever names like “Catnip” (Gale’s pet name for Katniss), “Baker’s Son” (a nod to Peeta) and “Primrose” (after Katniss’ sweet sis) the pretty shades will be twice as nice for Hunger Games fans (Fashionista staff included).”

What do you think about this new Hunger Games endeavor? Too much?