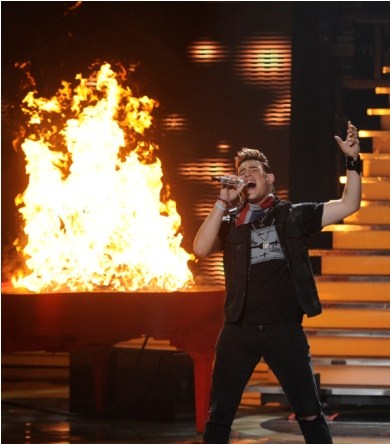 Last night on American Idol, contestant James Durbin took a controversial stab at Michael Jackson and Pepsi.   After his performance, host Ryan Seacrest asked him what he was the most nervous about. Durbin responded with, “I have a lot of hairspray in my hair to keep it from jumping around — so much so, the one thing I was worried about was having a ‘Pepsi moment.”

Durbin was referencing the 1984 incident when Michael Jackson’s hair caught on fire while filming a Pepsi commercial.  His scalp burnt and the drugs he took to help it are what eventually led to his drug addiction, then finally his death.   Joe Jackson was particularly upset that they didn’t remove this comment from the West Coast showing.

James Durbin responded to the situation by tweeting “For anyone talkin..I said pepsi NOT MJ! I have no disrespect for Michael. I grew up singing his art. I guess you’ll take it how you want it…” and then then later added, “Talkin about MJs passing is too soon. Making a reference to an incident 25 years ago..not too soon. The stab was at pepsi people.” So what do we think?   Forgive James Durbin or not?