InTouch: Teresa and Joe Giudice, A Wedding To Save Their Marriage 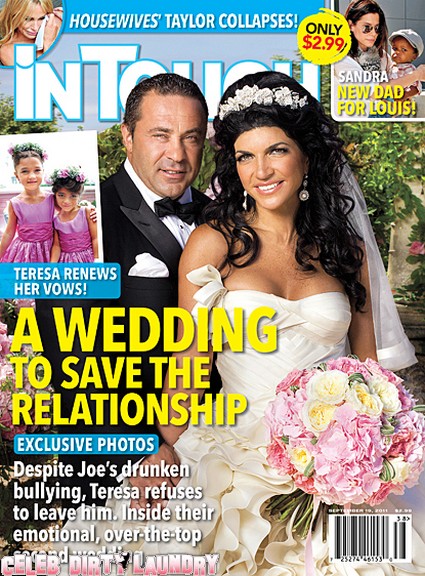 The September 19th, 2011 issue of InTouch features Joe and Teresa Giudice and the renewal of their marriage vows.   The magazine has exclusive photos of the lavish ceremony.  Furthermore, the magazine claims the renewal of vows was an attempt to save their relationship which has been dysfunctional at best.   The ceremony was filmed for Season 4 of the Real Housewives of New Jersey and considering the two filed for bankruptcy it is a safe bet the network is footing the bill.

From InTouch: His abrasive outbursts toward everyone — including his wife, Teresa — have made Joe Giudice one of the most hated men on reality TV. But even though bloggers have been calling him everything from a “jerk” to an “awful, awful person,” Teresa insists that Joe is Prince Charming. And recently, she set out to prove it — with a fairy-tale-themed second wedding at Long Island, N.Y.’s Oheka Castle, which included everything from a horse-drawn carriage to a tearful renewal of their vows to an extravagant gown that was truly worthy of a princess.

Also in this week’s magazine they are claiming that Sandra Bullock has a new father for her adopted son Louis.  I have to guess they mean Ryan Reynolds since it is rumored that they are dating.  Ryan has been spotted at Sandra’s house and the whole world is hoping that she can finally find happiness.

To read more about all these stories pick up the current copy of InTouch which is on stands now!