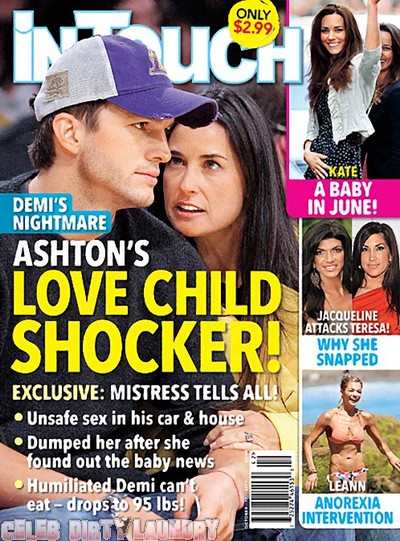 And the crazy train involving Ashton Kutcher and wife Demi Moore continues to roll on!

His mistress tells all to ITW about their “love child shocker!” According to the reports, Ashton and she had unprotected sex in his car and house. Of course, they aren’t naming the “mistress”, so we’re wondering if it’s Sara Leal this time or another of his reported hot tub bimbos.

They also state that Ashton dumped her after she found out about the baby news. Also, as we’ve already covered, they’re claiming that Demi is humiliated and has dropped to 95 pounds.

Also featured in this issue, they’re claiming that Duchess Kate is expecting a Royal baby in June. In addition, we get some Real Housewives news, and LeAnn Rimes’ skeletal looking “anorexia intervention”.

We’re curious now as to whether or not Ashton really did knock some chick up. Do you think he would be that stupid? Or perhaps next week, the tabloids will spin it as a girl who Demi and Ashton hired to be a surrogate so they could have a baby together?