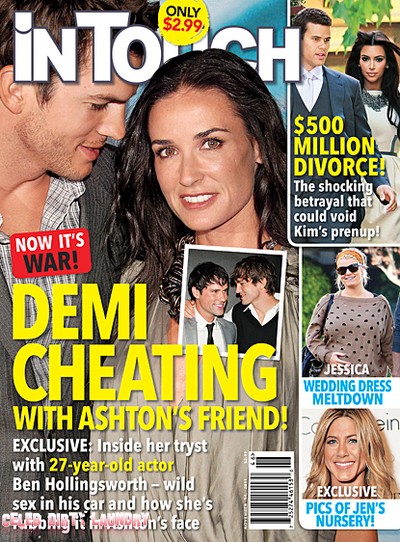 The November 7th, 2011 issue of In Touch Weekly features the cover story ‘Demi Cheating With Ashton’s Friend.’  Well this is a change!  For weeks now the news has been all about Ashton Kutcher and his cheating ways.  Now the magazine claims it is war and Demi Moore is cheating on her cheater hubby with Ben Hollingsworth.    Worse still Ben is Ashton’s friend!  The claim to have the exclusive details of her tryst with the 27 year old actor and their wild sex in his car.  She is suppose to be throwing this all in Ashton’s face to get even.

In Touch has more:  After years of reveling in her reputation as one of Hollywood’s sexiest women, Demi Moore has seen two of Ashton Kutcher’s young mistresses go public within the past few weeks. And in Demi’s mind, a friend shares, she worries that the whole world believes she’s washed up, over-the-hill and unable to satisfy her much-younger husband. “She just can’t get over it,” the friend confides of Ashton’s much-talked-about romps with Brittney Jones and Sara Leal. “It drives her crazy and makes her painfully aware of their age difference.” And so, in yet another shocking turn of events, Demi is spitefully striking back — her friends are now leaking details of her own betrayal.

Demi has had to live with not one but two affairs of Ashtons that went public so I guess this is her way of getting even.   Now Demi clearly not known for her brain power is going for another young stud.   At 48 perhaps Demi should try to hook up with someone her own age and they may stay faithful.   Can you just image her ego and how difficult it is to live with her?    Face it Demi time to grow up….

To find out more of the details pick up the current issue of In Touch Weekly!