In Touch Weekly: RHONJ: Dirty Secrets That Could Ruin Them Revealed! (Photo) 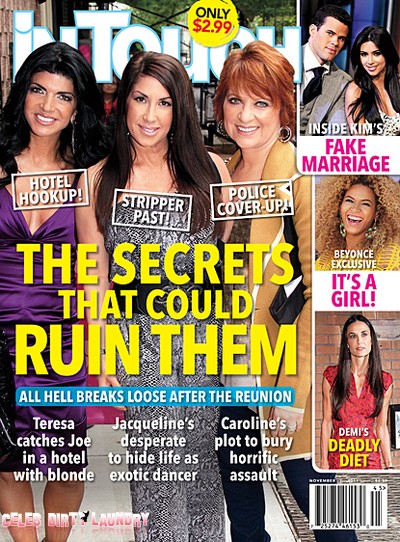 The October 31st, 2011 issue of In Touch features the cover story ‘Real Housewives of New Jersey, the secrets that could ruin them.‘   The magazine claims all hell broke lose after the reunion show.  This is the second week that RHONJ gets the cover of the magazine, last week they featured Teresa Giudice and why her fellow castmates hated her.  Not to stop there this week they have all the details of the mayhem that broke out at the reunion show.

In Touch as the scoop:  So much mud, so little time! The Real Housewives of New Jersey went postal on each other during the reunion special and were forced to discuss their most humiliating moments. What’s so crazy is that the embarrassing dirt they dredged up about each other isn’t even the worst of it — it’s the tip of the iceberg. Unbelievably, In Touch has uncovered even more scandalous secrets about Teresa, Caroline and Jacqueline Laurita (who was a no-show at the reunion) that they are desperate to keep under wraps for fear of being humiliated… again.

Blazoned across the cover they claim: Teresa caught Joe with a blond; Jacqueline’s trying to hide her life as an exotic dancer (translated stripper) and Caroline’s plot to bury a horrible assault.  These secrets will ruin then screams the cover.  LOL, As if…

I always think after watching this show that I’ve lost a few braincells.  What will I do as I wait for another season ;-)  Do you watch this show?  What do you think of it?  Sound out in the comments below!