In Touch Weekly: Why the RHONJ Housewives Despise Teresa Giudice 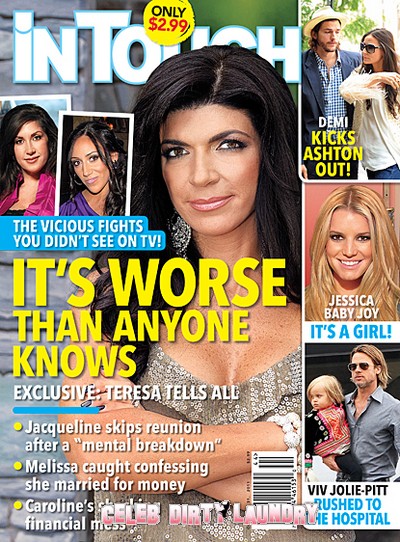 The October 24th issue of In Touch Weekly features the cover story ‘The RHONJ, It’s Worse Than Anyone Knows.’  Apparently there are vicious fights that are not show on TV but ITW knows all about them.  Additionally, In Touch has an exclusive as told by RHONJ Teresa Giudice about why the other housewives hate her.  The magazine goes on to claim that Jacqueine skipped the reunion because of a mental breakdown. Melisa was caught confessing she married for money and Caroline finances are in a shocking mess!

In Touch has more: Teresa Giudice likes to portray herself as the New Jersey Housewife who has everything. But as rich and successful as she’s become in recent months, Teresa has paid a dear price when it comes to her friendships. Never did anyone seem so unanimously hated as Teresa was on the October 16 reunion episode of The Real Housewives of New Jersey — with sister-in-law Melissa Gorga calling her “the devil,” onetime pal Caroline Manzo loudly questioning her financial situation and ex-BFF Jacqueline Laurita so furious with Teresa, she never showed up for the taping at all.

Teresa’s castmates are said to despise her and do not support her and the magazine has all the details on why.  Do you think her castmates are jealous of her?  Or are they justified in hating on her?

Also in this week’s issue they are not only claiming that Jessica Simpson is pregnant but apparently they know she is having a girl.  I am betting one of their insiders told them that :-)

If you want to find out all this and more pick up the current issue of ITW!