Is Everyone A Vampire? Colin Farrell Jumps On The Fang Wagon 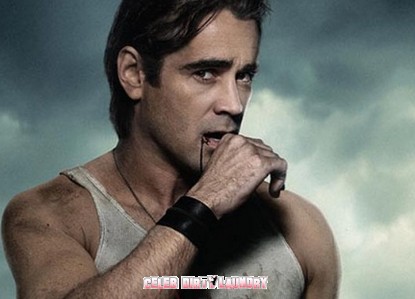 Colin Farrell, 35,  plays a vampire in the comedy-horror ‘Fright Night’ which hits cinema screens later this year.  In a remake of the Eighties favourite, Anton Yelchin plays Charlie Brewster, a teenager who becomes convinced that his new neighbour Jerry, played by Farrell, is a real vampire.  Directed by Craig Gillespie (Lars and the Real Girl, United States of Tara), the film also stars Toni Collette, Christopher Mintz-Plasse, David Tennant and Imogen Poots.

Colin the ever popular Irishman is currently seen opposite Jennifer Aniston in ‘Horrible Bosses.’ In it he plays sleazy company chief Bobby Pellitt who becomes the subject of an assassination plot by one of his employees. Colin has been with a string of Hollywood beauties, has most recently been linked to Justin Timberlake’s ex, Jessica Biel.  The pair are reported to have become close while shooting the remake of action movie ‘Total Recall’ in Toronto.