Is Kim Kardashian Looking For an Oil Sheik Billionaire in Dubai? 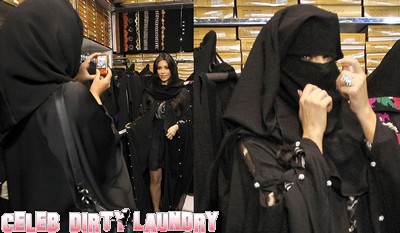 Kim Kardashian is just about as far from the Islamic ideal of a woman as possible. She is neither obedient nor modest, as her poor husband Kris Humphries has doubtlessly already learned to his pain.

Nevertheless Kim decided it would be politic to don the traditional burka while strutting around Dubai with her mom, Kris Jenner.

So yesterday Kim was all covered up her – her expensively purchased figure nowhere to be seen as she and mom tried on a new fashion and wore burkas.  Kim and her mom visited one of the many shops that deal in the traditional Isl?mic garment.

The two women laughed as they took pictures of each other in the garb, which women in Isl?mic countries must wear.

The pair drove people nuts when they walked the streets wearing the traditional garb and bodyguards were forced to join hands to protect them from screaming fans.

On the first day of her break Kim wrote: “Wow I’m in such awe over Dubai! My hotel is so insane, can’t wait to do some blogs & show u guys! Too much to tweet! I’m obsessed with Dubai!”

And this morning she tweeted: “Good morning Dubai! I’m having the best time here! I got some amazing traditional souvenirs to bring home to the fam, they’re gonna love!”

Kim just better make sure that her fundamentalist ‘fans’ don’t get their hands on her – or it might be a stony reception indeed.

Of course it is a pleasure not to see Kim’s face and body for a change, maybe she’ll do us a favor and move to Dubai, or at least turn Isl?mic?