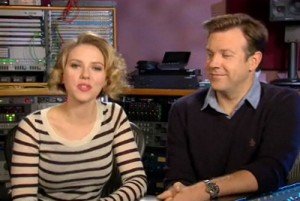 Actress Scarlett Johansson, 26, announced her split from Ryan Reynolds on Dec. 14, 2010 after just two years of marriage.  It seems like Scarlett is moving on with her life quickly.  Romor has it she has already moved on with  Saturday Night Live funnyman Jason Sudeikis, 35.  The two were spotted on a double date with fellow SNL star Will Forte and a female guest.

“It definitely looked like a double date!.  Scarlett and Jason were flirting and making lots of eye contact. He reached across the table twice to grab her hand.”

Lets not get too excited about this since the breakup Scarlett has been linked to a string of men included: Kevin Connolly, Leonardo Di Caprio and Jake Gyllenhaal.  She is probably just trying to mend her broken heart after losing Ryan!