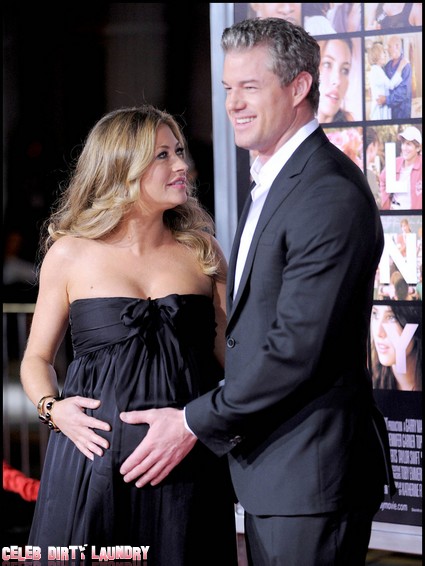 Rebecca Gayheart and Eric Dane are the proud parents of  a baby girl. The former 90210 actress gave birth this week in LA.

The couple have issued a statement confirming their great news “Rebecca Gayheart and husband Eric Dane welcomed Georgia Geraldine Dane on Dec. 28, just in time for the New Year! Both mom and baby girl are happy and healthy, Billie is thrilled to be a big sister, and dad is getting ready to live in a house full of ladies!” Ain’t that the truth!

Their first child Billie Beatrice Dane was born in March 2010. They obviously like alliteration when naming their children.  So the pair will have their hands full with two kids under two! Although I’m sure there’ll be a mini celebration this New Year’s Eve to welcome the latest addition.

Eric – who’s best known for his role as Dr Mark ‘McSteamy’ in Grey’s Anatomy –  and Gayheart wed in 2004 .Eric says getting together was no big deal ‘It’s probably one of the least interesting stories in the world. It went basically like this: You wanna go out? Yeah, sure. Ten months later, we were married’. His last major part on the big screen was in the musical Burlesque.

The 40 year old Rebecca first shot to prominence in the original Beverly Hills 90210 as Luke Perry‘s love interest. That was followed by a string of teen flicks like Jawbreaker. She’s also appeared in Ugly Betty and Nip/Tuck. Her last major role was in a nude video with her hubby and a former Miss Teen USA in 2009.