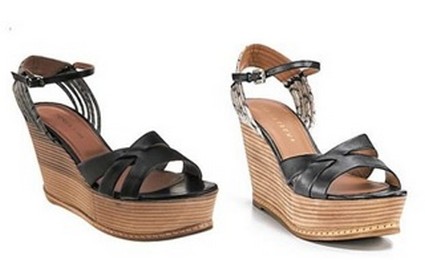 It’s been said that imitation is the best form of flattery, but apparently in the celeb fashion world, that is not the case! Designer Derek Lam served Ivanka Trump Footwear with a cease and desist letter Thursday over a conventional looking sandal they claim is an exact replica of their design.

The hullabaloo broke out when a Derek Lam shoe designer was shopping online at Bloomingdales.com and spotted the similar, and admittedly, much cheaper shoe. Upon noticing that the Trump Cadie wedge sandal ($150) looked a lot like their Ayami wedge ($780), the employee alerted Derek Lam CEO Jan-Handrilk Schlottmann. Schlottmann told Women’s Wear Daily, “We have seen very similar copies before but we have never seen a shoe that perfectly copied.”

Mark Fisher Footwear is the licensee of Ivanka Trump Footwear, and Mr. Schottmann noted, “I’m sure Ms. Trump doesn’t know her wedge is copy because it’s through a license.”

Marc Fisher Footwear defended itself against Derek Lam’s Claims in a statement to People magazine today. “The Lam wedge sandals are of a popular design type that has been used by numerous manufacturers for many decades. There is nothing iconic about the appearance of the Lam sandal.”

Though the similarity cannot be denied, I venture to agree with Marc Fisher that the design isn’t exactly cutting edge, a la Lady Gaga meat dress. Let’s face it copyright law or not, this is a recession. Why would the majority of people pay $780 for a shoe that they can get cheaper? Therein lies the rub for the Derek Lam company—who have given Mark Fisher Footwear seven days to remove the shoe from shelves.

Along with the footwear company, new mom Ivanka Trump also has a line of Jewelry and Handbags under her name. She has not released a statement regarding the sandal.