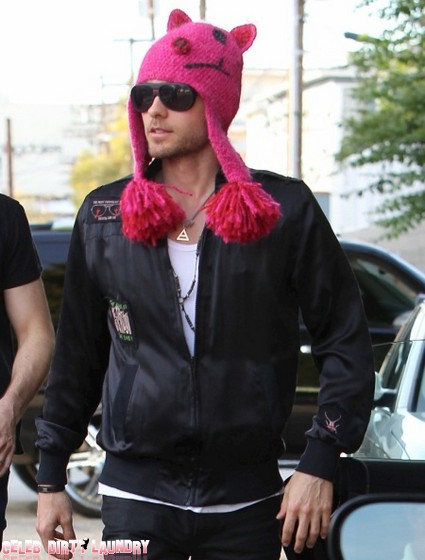 Let’s face it Jared – who just turned 40 – is not afraid to push the fashion boundaries. GQ have justified their choice saying ‘the dubious honor goes to the 30 Seconds to Mars ringleader, actor, and high fashion-fool, who looked extravagantly terrible all year long. He’s flaunted nipples through mesh shirts. He’s worn skirts about as frequently as pants. He’s rocked a mullet. He is the Worst-Dressed Man in the World.’

The mag goes on to describe Mr Leto as ‘the most wealthy-looking homeless person in the room, hence the drug rug, rainbow-puke gauntlets, recycled emo kid-jeans, and patent raver sneakers.’  To sum it up GQ added ‘The essence of the Leto Complex – A man who can afford an Alexander McQueen suit – conceivably a very nice one – but opts for Ugg slippers and a couture Snuggie.’  Nice description!

The ironic thing is Jared probably doesn’t mind the accolade. He once said he didn’t want to be a role model to his younger fans. He wants them to be inspired by his success in both film and music but not by the way he carries on. So hopefully none of his fans are taking a fashion leaf out of his book. If the title has hurt his feelings he can always give Rachel Zoe a call. I’m sure the stylist to the stars would be up for the challenge.