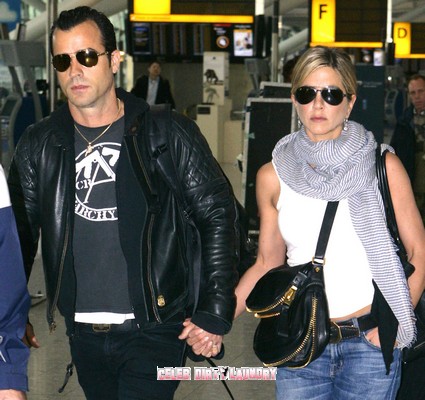 These two lovebirds are turning up everywhere together, especially with Jennifer Aniston jet setting around the world promoting her new film, Horrible Bosses.

The two were spotted at Heathrow Airport on Thursday in London, England holding hands and looking chic as usual.  Jen, 42 (if that’s what 42 looks like, I’ll take it), was casually dressed in a white tank, a pale scarf, jeans, flip-flops, and cool shades.  Justin, 39, was in his usual leather attire looking gorgeous as always.

They were in London to promote the film, but that didn’t stop them from dining out at London’s Shoreditch House restaurant the night before.  Jen’s movie, also starring Jason Bateman, Jason Sudeikis, Charlie Day, and Colin Farrell, took in $17.5 million at the box office.  Go Jen!