Jennifer Aniston Flashes Her Breasts In New Movie – Who Cares? 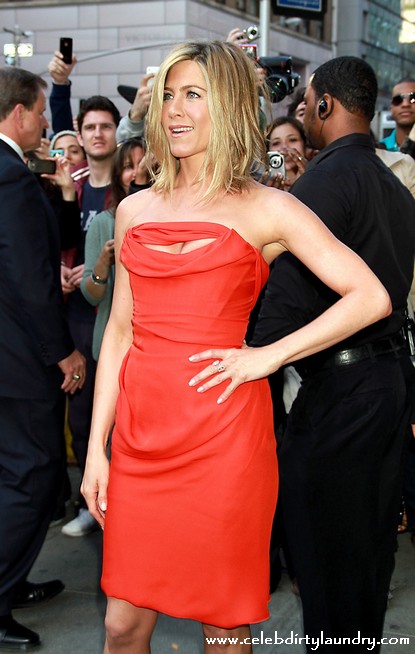 Jennifer Aniston – who was dumped by Brad Pitt for Angelina Jolie – and has never recovered – is rumored to finally flash her breasts in the raunchy comedy Horrible Bosses.  Aniston is frequently undressed on screen but tends to cover her breasts.

Honestly, I can’t imagine why anyone would care what Jennifer Aniston does on screen with her breasts.   Its not like she is a great beauty.

“She shot a topless scene, but produces aren’t sure if they’ll use it,” a production source reveals. “They filmed it two ways – in one, you see Jen’s face and boobs in the same shot. In another, the audience might think it’s a body double.”

Still, the source insists Jen — who plays a dentist who sexually harasses a male employee (Charlie Day) — had no problem doing nudity. “She knows she can’t show off her boobs forever, so she’s going out with a bang!” Still, a second says, “Jennifer did not shoot a topless scene. She may appear nude, but you do not see Jennifer topless.”

The naked truth won’t be revealed until the flick opens July 8, but in the meantime, the movie’s posters are designed to titillate the weak-minded. “She told marketing to push the envelope on this one and not play it safe,” a source says, noting that one poster will feature Aniston with a banana in her mouth. “The studio is playing up her sexuality, and she’s all for it!”

Jennifer Aniston with a banana in her mouth – oh my!