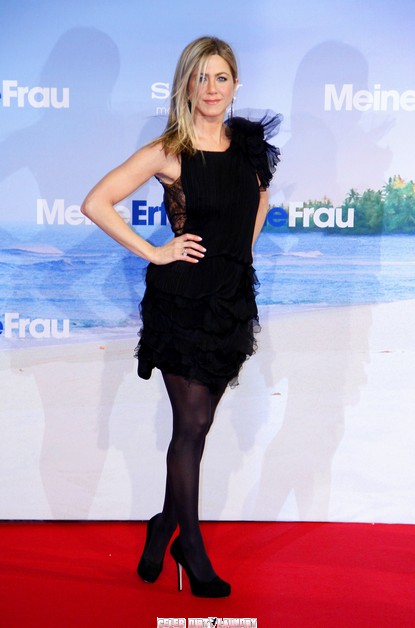 Jennifer Aniston’s romance with Justin Theroux has ended his 14-year relationship with his live-in girlfriend Heidi Bivens, who moved out of their home last weekend. Jennifer has the hardest eyes in Hollywood and ever since Brad Pitt left her for Angelina Jolie she has been very bitter woman – now she is doing just what she has been so critical of Jolie for – home wrecking.

Sources report that Hollywood costume designer Bivens “is devastated” after Theroux abruptly ended their relationship as he got close to Aniston.

Aniston, 42, and Theroux, 39, met last fall on the set of “Wanderlust,” due in October, but in recent weeks they have become inseparable.

A source told us, “Heidi is heartbroken. She was completely blindsided. She and Justin had been together for years, they had a home. Then he met Jennifer and everything changed. At first he claimed he and Jen were friends.”

A rep for Bivens confirms: “Heidi and Justin have been together for 14 years. They met when she was 20 years old and he 24, and yes, she just moved out of their home last weekend. She has no comment.”

When Aniston and Theroux were first spotted dining together in May, her rep insisted they were friends. But it was reported at the time that Theroux is “edgier than the guys Jen usually dates . . . she really likes him.”

In recent weeks, the pair have repeatedly been seen dining out and reportedly spending weekends together, with Hollywood sources telling us that “things are moving fast. They are practically living together.”  Despite Heidi’s heartbreak, a friend of Theroux claimed, “Things were already over between him and Heidi before he got close to Jen.”