Jennifer Aniston: ‘The Raunchier, The Better’ 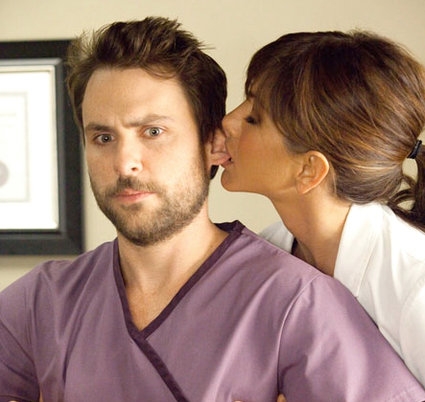 “I think men are intimidated by confident women at any age,” Jennifer Aniston said to Chicago Sun Times. She’s been anxiously awaiting the opening of Horrible Bosses, where the typical Rachel Greene good girl gets to reveal her bad side on screen.

Aniston said of her character, “I thought of her like a guy. Other than that I just stuck to what was in the script. I didn’t have any input as to what she said. That was all on the page. And I was tickled and excited. The raunchier, the better.”

The actress plays a dentist in the upcoming film who sexually harasses her dental assistant, Charlie Day, in the workplace.

“I just kept apologizing to Charlie for everything I said or what had just happened during a take,” Aniston said. “In between straddling him, I would say, ‘I’m so sorry. Really. Are you doing OK?’”

“She did bite my ear … really hard,” Day said. “My natural reaction to what was coming out of her mouth was caught on film. My job was to act shocked at what she was saying. That was real shock.”

Aniston reveals her super toned bikini bod in the upcoming movie, but quickly dismissed any rumors of a topless scene.

“Not true at all,” she said and laughed. “Where do these things start?”

Between her new tattoo and her new bad boy boyfriend, it looks like America’s sweetheart is enjoying her newly found bad side.

“I don’t want to play it safe all the time,” Aniston insists.

Horrible Bosses hits theaters July 8 – Will you be seeing it?