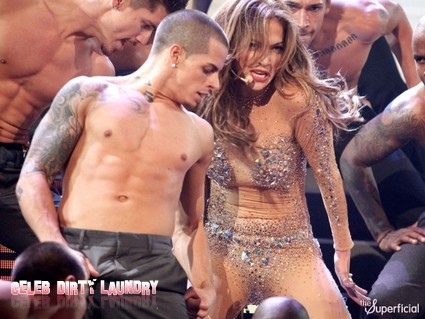 Jennifer Lopez is one angry cougar after being mistaken for her toyboy’s mother. Jeniifer has been romancing the 24-year-old Casper Smart who she elevated from the position of one of her backup dancers to the position of her toyboy.  And according to the National Enquirer Print Edition Jennifer is now reaping the scorn that comes with having an inappropriate relationship which she has made very public.

According to a source close to Jennifer she shrieked: “I’m his girlfriend — not his mother!” – after being incorrectly identified as Casper’s mama.

The incident occurred innocently enough at a McDonald’s restaurant – “The two of them stopped in a McDonald’s recently, and Jennifer was mortified when the cashier asked Casper if he wanted to have his mother’s order added to his or if they were going to pay separately. Jennifer shouted: “I’m his girlfriend — not his mother!”

According to the source Jennifer then grabbed Casper by the arm and stalked out the joint. Perhaps JLo better stick to eating at classier places – places where the staff is more subtle.

Jennifer’s pal went on:  “She doesn’t know what’s worse — being mistaken for Casper’s mother or being accused of being a cradle-robbing cougar!”

Jennifer is simply burning up inside – now she realizes that at 18 years Casper’s senior she can’t quite pull it off – people are noticing the obvious age difference and making comments.