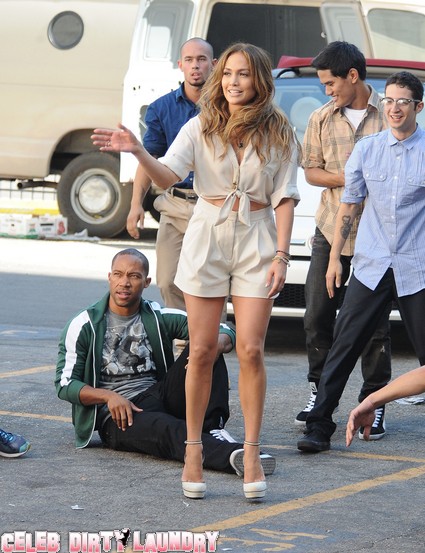 Jennifer Lopez is one of three judges on ‘American Idol’ – currently the most popular TV show in the USA. It seems fans just love to watch contestants try to impress the judges and home audience with their singing talent. Two of the original judges, Paula Abdul and Simon Cowell, were replaced by Steve Tyler and Jennifer Lopez and the show prospered.

But Jennifer has trouble getting along with men – look at her recent separation from Marc Anthony, her nasty courtroom battles with ex-husband Ojani Noa, divorce from Cris Judd, and her publicized split with Ben Afleck.

Now that she is working alongside Randy Jackson and Aerosmith front man Steven Tyler Jen has revealed that there are already tensions between the judges.

Speaking to Ryan Seacrest on his KIIS-FM radio show Jen said: “Me and Randy and Steve got into our first fight. I was upset.” The 42-year-old superstar explained that the disagreement started after Lopez saw a contestant perform whom she described as “amazing”, however, Aerosmith rocker Tyler didn’t quite see the contestant in the same light and refused to vote for her and that’s when the argument erupted, with the Jenny From The Block hit maker saying “Are you guys crazy? Literally I thought I was being Punk’d. ‘How can we let this girl go?’ She had a great vaoice.”

Randy and Steve better watch out! Jennifer is a Scientology freak and this shady secretive cult will stop at nothing.