Jeremy Renner – ‘Bourning’ It Up In New York City 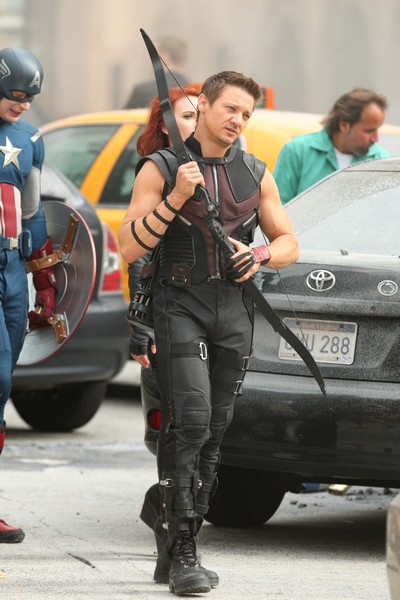 It’s going to be different seeing a new actor play the lead and title character of Jason Bourne – the role which was originally played by Matt Damon. The torch is now being handed over to Jeremy Renner (The Hurt Locker, The Town). Personally, I was never overly attached to Matt, and I suppose just like James Bond, this role can be ‘bourne’ again. Ok, that’s a good one if I do say so myself.

So, can Jeremy pull it off? Are the shoes really that big to fill? Debatable. What I do know for certain is that Jeremy has proven to be a great actor over the past several years and has developed quite an impressive film resume, working alongside top Hollywood actors. Be it as it may, we shall find out when the newest Bourne film, The Bourne Legacy’ hits theaters next August. The movie also stars Edward Norton, Albert Finney, Joan Allen, and Rachel Weisz (ahem, who also happens to be married to a Mr. Bond himself, Daniel Craig).

Check out the actor on set in New York as he steps out of his trailer. Although not in his ‘ Bourne-attire’, he’s lookin’ aight to me.