‘Jersey Shore’ Battle Royal Between ‘The Situation’ And Ronnie Ortiz-Magro 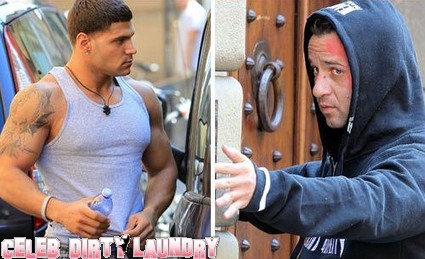 Someone should have told Mike ‘The Situation’ Sorrentino to stay hungry or up his steroid dosage as it seems like our favorite 6-packer gets the worst of it in a brawl with Ronnie Ortiz.

In MTV’s new teaser trailer for a special episode that will air Sunday at 7 p.m. ahead of the Video Music Awards, the formerly friendly GTL goombahs throw down in Florence, Italy, and the action gets so heated that MTV crew members have to step in to separate them.

Earlier reports that castmates Mike “The Situation” Sorrentino and Ronnie Ortiz-Magro got into a physical altercation during filming in Italy have never been absolutely confirmed but we’ll see the proof Sunday.

While Sorrentino apparently lost the fight, both combatants sustained injuries, with Ortiz-Magro’s knuckles scraped up from pummeling Sorrentino’s face, which shows red marks from the thrashing.

The trigger for the battle was an argument between Ortiz-Magro and Sammi “Sweetheart” Giancola.